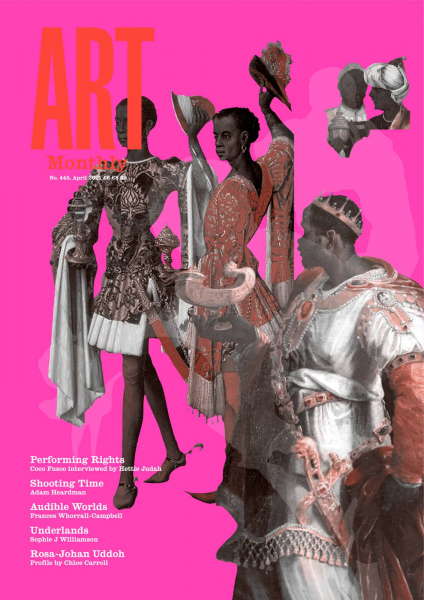 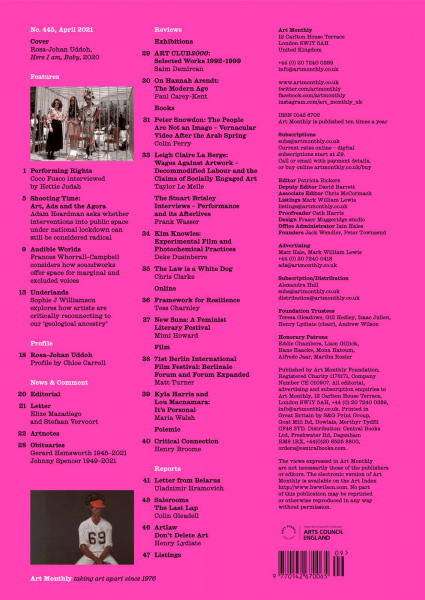 Critical Connection
‘We’re all in this together’, government press briefings say, but some are more in this than others. A report by the Office for National Statistics reveals that Covid-19 mortality rates in the poorest areas of England and Wales are twice that of the richest. According to the Institute of Fiscal Studies, keyworkers are at greater risk of infection, and death rates among black and Asian groups are twice that of the white population in the UK. Inequality has widened – it’s there in the figures – but there’s also been a loss of collective feeling which is harder to quantify, the result of deliberate hard-headedness, as well as of necessary lockdowns and social-distancing measures implemented too late and not extended far enough, resulting in no less than state-sanctioned murder. We have become untethered from each other, emotionally distant, the way art criticism has sometimes been untethered from the people around it.

Criticism struggles with attachment. Critical distance is a spatial metaphor for the relationship between the critic and surrounding world. In The Limits of Critique, Rita Felski associates it with a critical method the author calls ‘standing back’. A kind of mistrusting exile-misanthrope, critics absent themselves from society, preferring to study people, culture and art from afar. A critic is supposed to be neutral, non-partisan, to have no vested interest, no political allegiances, deny all associations. Their logic is without premise, but they see the ideological underpinnings of others’ thinking. The critic looks from the outside in, sees beyond the assumptions that make thinking possible, ‘a view from nowhere’, as Felski says.

A classic critic-exile, Charles Dickens writes about industrial squalor as if from a train window, says Raymond Williams, who describes Hard Times as ‘a symptom of the confusion of industrial society rather than an understanding of it’, the work of someone who has ‘seen through society’, ‘found them all out’, an author who recognises the meek as an ‘object of pity’ but never gives a name to the cause of their suffering. The voice of Victorian values, Dickens splits society into the deserving and undeserving poor, philanthropy the only feasible solution to immiseration. Dickens doesn’t call for social reform, champions individual betterment, endurance, the will to strive, never tiring. He shares a lot with anti-vaxxers today. Through the pandemic, the libertarian right, often old, white men (read: gammon) have vehemently refused to wear masks in public. For them, face-coverings are violations of personal freedom, lockdown and the vaccine are seen as state intrusions. They believe in radical self-reliance and autonomy. Society is external. Social responsibility is an imposition, an assault on individual liberty. Common decency is suspicious, civic duty authoritarian, a threat to their own ‘hard-fought for’ success. There is no such thing as society, the family is the only exception, like Margaret Thatcher said.

For critic-exiles and right-libs alike, privacy is paramount, anonymity sacred. Critics speak as if through a doorbell camera, the voice of a faceless third person, unseen, off limits to their readers, closed-off from the outside world, their inner-life uncompromised and walled-in. Unbiased, unemotional, the critic-exile lays claim to scientific objectivity and enlightenment rationality. Above all, criticism is supposed to be neutral, unremarkable, dull – like a dentist’s waiting room. Such critics speak from a place that’s just there: a place which claims to have no history, culture or politics, a vacuum, a space which transcends space. Neutrality, however, is just another stance, another position. As Felski writes, these critics routinely ‘smuggle in values and judgements’ under the guise of ‘balance’, but because neutrality lends them authority, academic stature, and makes them invisible, their assertions hold unwarranted weight and their opinions seem like common sense. As a result, such critics often go unchallenged and, even if their views are disputed, they are unaccountable.

‘Standing back’ is only one kind of art criticism though, it is not exile or bust, there are other types of criticism, other ways of relating to each other, it doesn’t have to be detachment and guarded mistrust, even if we can’t be physically near each other right now. I want criticism that does not pretend to reserve judgement, takes a stand rather than stands back, prone to emotional outburst, yet opens up conversation, never claims to be the last word. Criticism which aligns itself with struggles, make connections, form associations, appeal to the reader’s sensibilities. I’m not making a wholesale attack on criticism and on critics’ lack of principle. I’m arguing against the presumption detachment helps critics hold power to account and trying to relate the constant push and pull between distance and connection, made more apparent by the pandemic. Covid has eroded commonality, it’s hard to even think about at the moment, but connectedness doesn’t rely on bodily proximity, it is staying in touch beyond touching distance, it is its own salve.