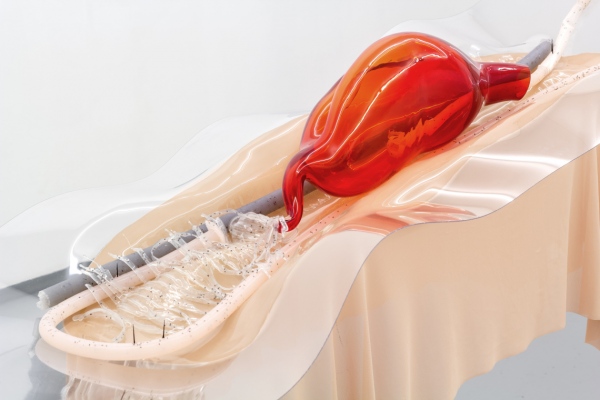 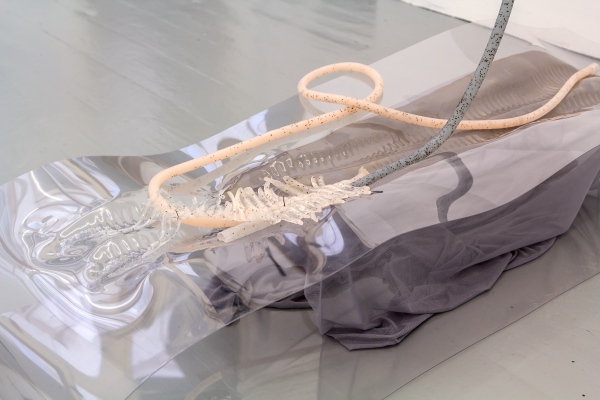 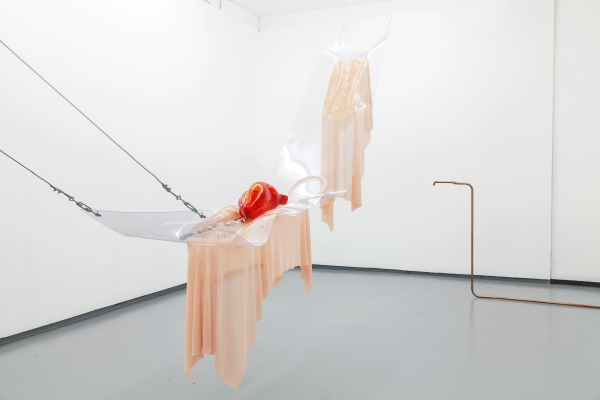 Pakui Hardware: The Return of Sweetness

From outside on the street, Tenderpixel’s large front window reveals a gross display of ripened entrails, hanging from ceiling to floor. But despite their putrid colour, once inside visitors find what looks like a fully functioning digestive system, wired up and seemingly sustained by electric current. Artist duo Pakui Hardware’s science-fictional exhibition transports viewers to a radically experimental laboratory, striving to engineer a super-human metabolism, providing a strangely familiar parallel to a real world governed by the ruthless pursuit of productive efficiency.

Two glass-blown objects, shaped like stomachs but somewhat larger than a human’s, one deep blood red, the other a peachy orange, dangle in mid air, suspended by black cables tied to hooks in the ceiling. Above, running parallel with the cables, long, thin, translucent silicone tubes speckled with chia seeds act like oesophagi. A second set of tubes flows from the cavity in the glass stomachs down to shiny sheets of heat-treated PVC, bent over double and bolted into position. On top, indentations of ribbed pipe coils call to mind the rings of muscle that squeeze food through the intestines and, attached to the underside, trails of fine net fabric flow towards the ground, one industrial grey like the painted floor below and the other fleshy pink, forming a waste shoot which, together with the other components, forms an apparently complete, and working gastrointestinal tract. But without the other major organs and the flesh, muscle and bone that make up most basic mammals – unable to therefore feel, move, think or reproduce – all these plug-in viscera can do is ingest and excrete food and liquid; it is little more than an energy-burning machine. That said, perhaps the installation doesn’t represent an effort to replicate a fully working human body but rather an attempt to develop a hyper-efficient metabolism capable of converting less and less food into more and more energy.

In the basement downstairs, hidden away from the eyes of passersby, the pursuit of bodily perfection is taken to monstrous extremes. In the first room, viewers are met with the horror of a kind of torture rack; rather than furled up on the floor, a PVC sheet stretches across the room, strung tight by metal wires screwed into the walls, with the glassware and tubes resting on top and the fabric falling below. Next door, clipped to the walls, there is a series of curvy, abstract shaped, neon tube lights connected to cables running around the room and up the wall as though lit by power generated from the digestive mechanisms about the gallery and seemingly providing a gauge of each system’s output as well as a means to scale improvements.

This sort of obsession with maximising nutritional return carries frighteningly dangerous socio-economic import. The medical journal Nature defines metabolism simply as ‘the chemical reactions that occur within an organism to sustain life’. Theoretically, if it were possible to isolate and optimise a human survival instinct, there would be no limit to the potential our labour might be exploited. No matter how dire the job or mean our existence, we would just keep on working.

And this, disturbingly, is to some extent the dystopia in which we already live. Today, there is an ever-greater pressure to cater your diet around work. Take the increasing demand for powdered meal replacements. Dissolved in water or milk and taken as a drink, products like Huel – a contraction of ‘healthy fuel’ – reduce eating to a simple input-output equation, as opposed to a pleasure to be savoured. While powdered foods are often marketed on the basis that they contain only marginal amounts of sugar, many people find them unpalatable without adding fruit, peanut butter, cacao, or the like, calling to mind ‘the return of sweetness’ invoked by the exhibition title. That said, Huel is relatively cheap, contains all 26 essential vitamins and minerals and could be used to nourish those too poor to afford the same nutrition from conventional foods. It could also save the slaughter of livestock and curtail the greenhouse gases they produce. But living in an economy driven by relentless efficiency, all that really matters is that such foods require little time to prepare and can be consumed at a desk, ensuring that any disruption from work is minimal. We are already, and have been for some time, being engineered to be the dumb, sedentary input-output machines in the gallery.