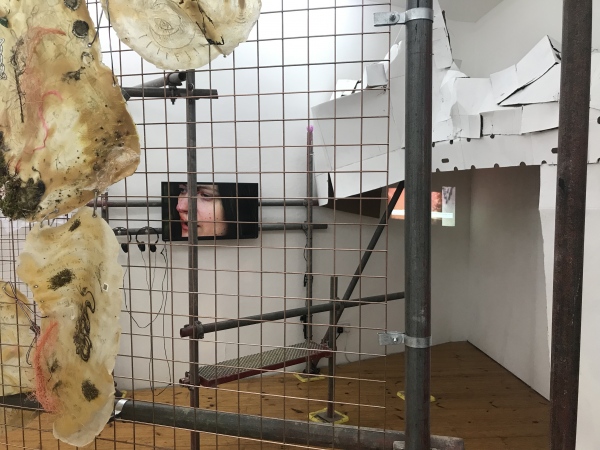 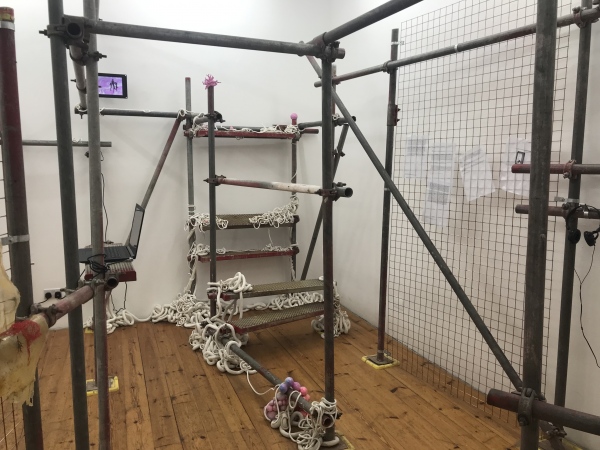 Regular exhibitions are delimited by gallery walls – fixed, solid, square – not like the sprawling scaffold IMT’s group show is built around. No two sections are the same. It’s asymmetrical; also amendable, provisional; scalable, too. It can support limitless additions and varying configurations. Curated by Kirsten Cooke, ‘Snow Crash’ poses a framework for building and understanding infinitely complex, expansive systems.

Projected under a mountainous white cardboard structure on top of the scaffold, Linda Stupart’s montage film After the Ice, the Deluge, 2018-19, presents a series of deteriorating images as a metaphor for accelerated glacial melt. Grainy, red-tinted 16mm film, originally produced by the Canadian Science Film Unit, shows snow-capped peaks bathed in bright sun. A caption over footage of gushing icicles reads: ‘Climate change is melting permafrost soils that have been frozen for thousands of years’. Then the film rapidly intercuts between video of a faded, flakey tattoo; followed by what could be a black-and-white hospital drama, picturing hurried surgeons huddled around an operating table; then, in the film’s dying seconds, the final credits flash up –‘THE END’ – and the celluloid melts away, a solemn reminder of the ever-more urgent global-warming warnings.

Politics as Palliative Care of the Species, 2019, a video by Diann Bauer &amp; AST (an artistic research collective), examines the wilful blindness to the evidence linking climate change and globalisation. Like the diagrammatic language of Stupart’s film, the video sets up a clear causal relation between a sequence of images: sprawling high-rise cities, flight-path networks, iceberg break-up and suburban floods. Then, we abruptly cut to then US defence secretary Donald Rumsfeld at a press briefing, talking about the intelligence regarding Iraq’s alleged WMD programme: ‘There are known knowns,’ he starts. ‘There are [also] known unknowns – that is to say, we know there are some things we do not know. But there are also unknown unknowns – the ones we don’t know we don’t know.’ There are also the things we won’t acknowledge we know – unacknowledged knowns – the sort of epistemology adopted by those who refuse to see the need for energy transition.

Pil &amp; Galia Kollectiv’s video in ‘Snow Crash’ picks up from the duo’s Future Trilogy, 2006-09, a series of speculative films where a cult forms around flat-pack furniture in the wake of the 2005 Edmonton IKEA riot. Interception on the High Seas, 2017, invokes a near future where intense demand for cheap, mass- produced goods has accelerated environmental apocalypse, leaving a few survivors forced to roam the sea in search of dry land, and new stuff to collect. We see three figures on a beach, wearing carnivalesque masks, building a boat out of thin sections of chipboard. They can’t quite figure out how it’s meant to fit together, but eventually manage and the three of them get in; then, as if they already consider the boat destroyed, wait for the waves to smash the hopelessly unseaworthy vessel to pieces. As Zygmunt Bauman writes in Liquid Love, 2003, consumerism is not about accumulating goods but using and disposing of them to make room for more.

But consumerism not only drives unsustainable waste, it also coincides with a wider socio-political failure to think beyond the immediate here and now. By contrast, the exhibition’s understanding of ecology, economics and other multivalent systems not only works across the local and global, present and near future, it also maps how they interact. Methodologically, ‘Snow Crash’ is comparable to xenofeminism, an idea devised by international feminist collective Laboria Cuboniks (which includes Diann Bauer among its six members). The 2015 manifesto, Xenofeminism: A Politics for Alienation, puts forward a vision of a global post-capitalist future ‘where gender justice and feminist emancipation contribute to a universalist politics’ which cuts across race, class and gender. We can read Ayesha Tan Jones’s Future skins from 2019 through the manifesto’s call to repurpose existing technologies to allow ‘a hundred sexes bloom’. A collection of semi-translucent latex sheets are flopped over the scaffolding; visitors find cables, bits of circuitry, plant matter, real and synthetic hair, also false nails and bird feathers melted into the skin-like material, materialising the infinitely varied, transformative anatomies imagined by XF.

As the XF manifesto notes, social media is a site of sexual harassment and doxxing, virtue-signalling and bad faith, a site where everyone waits for each other to make a fatal slip-up rather than a platform for connection, organisation, and skill-sharing, as it could be. In Tai Shani’s video I am Paradise, 2017, a therapeutic artificial intelligence called Algealux II retells ‘typical and exceptional’ accounts of sexual trauma, maybe mining posts from #MeToo, a movement which brought widespread collective catharsis, also solidarity. A woman, strangely wide-eyed, unflinching, as if a host for Algealux II, comes close to the camera and recounts a chain of violent, also erotic stories of abuse. The figure is oddly predatory: mouth and cheeks are smeared with blood and sometimes you can hear a low, guttural purring, like a tiger’s or that of another immensely dangerous, powerful being. Elsewhere, Melanie Jackson’s installation Gallivant, 2019, features a medieval pilgrim badge of phalluses carrying a vulva, animated as a GIF on a tablet, playfully substituting the traditional devotional relic for female genitalia and, like Shani’s video, asserting women’s sexual agency.

But you can only build equality if everyone has access to the social-cultural commons. Printed on paper and pasted to metal fencing, one of the texts by Lynton Talbot, titled Look at me... DON&#39;T LOOK AT ME, 2019, laments, ‘Not so long ago, airports felt like architectural anomalies […] We knew they were manipulating us, prompting us to move [...] in the right direction, [spend] a required amount of money’. But as Steven Flusty writes in his 1994 book Building Paranoia, previously open public areas, galleries and museums included, have become ‘interdictory spaces, designed to ‘repel or filter would-be users’, sort those who have spending power from those who don’t, rather than bringing people together. Claire Potter’s installation Rich Curtains Pending Performance, 2019, references the way art institutions have become increasingly territorialised. Multi-colour painted paper is furled around a passageway formed by the scaffold; it looks celebratory, welcoming, but then you notice hidden black paper cut-outs shaped like barbed wire, evoking the border-style security checks at museum entrances today. Like many exhibitions, ‘Snow Crash’ finishes in the gift shop at the gallery’s rear – but you maybe already enter into a contract, a promise to buy something, as soon as you ring the buzzer to get in. There are vulva-badge T-shirts for sale, listed as part of Jackson’s Gallivant, playfully collapsing art and commodity. As Rosalind Krauss writes in her 1990 essay ‘The Cultural Logic of the Late Capitalist Museum’, museum collections, or art more broadly, have turned from ‘irreplaceable embodiments of cultural knowledge’ to ‘assets whose value is one of pure exchange’. Elsewhere, part of Amanda Beech’s interactive computer installation This Time, 2017, features the audio from an online tutorial of Civilisation V, a strategy computer game where you compete to develop ever-more advanced societies. A voice that explains players can trade the museums they have built for hardware to improve the processing power of an in-game AI, positioning the museum itself (not just its collection) as a commodity like any other from which to extract money, an object of exchange value – in a way, like the exhibition’s scaffolding which offers ever-evolving spatial, temporal and conceptual meaning to a series of complex interacting systems.